The following historical information was provided by Kathy Leighton, one of the premier historians of Contra Costa County in modern times and the Clayton Historical Society. Much of the information was extracted from history books dating back as far as 1882, which accounts for the grammar and word usage in many instances.

This well known gentleman was the son of John and Mary (Bate) Clayton, and was born in Bugsworth, Derbyshire, England, probably in 1812. Joel was the eldest of 12 brothers and sisters. He there received his education and resided until 1837, having learned the trade of block cutter and wood carver. That same year he immigrated to the United States, first settling in Lowell, Massachusetts, and later moving to Pittsburgh, Pennsylvania, where he joined his uncle who lived in that city.

While in Pittsburgh, Clayton engaged in the manufacture of oil cloth, until 1839, when he went to St. Louis, Missouri. He was soon after joined by his father’s family, and upon their arrival, moved to New Diggings, Jo Davies County, Illinois, where he embarked in lead mining. 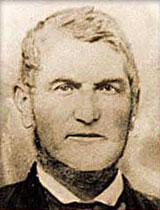 Early in 1842, he proceeded to the head-waters of the Platte River, Wisconsin, and there commenced the extracting of zinc from ore, a difficult task he prosecuted with much vigor, but owing to the want of proper appliances for the manufacture of retorts, he was ultimately compelled to abandon the industry.In 1845 he removed to Mifflin, Iowa County, Wisconsin, and was, as a matter of fact, the founder of that town. Here he resided until, 1850, in which year he came to California, bringing with him a number of practical miners to work in the gold mine, and a considerable drove of stock.

He first settled in Santa Clara County, and permitted the miners who had accompanied him to start whithersoever they listed-the only recompense he asked being the return of the amount expended on their outfit.

At the end of the year he moved to Stockton, and established a butchering business, which he continued until the fall of 1853, when he located San Francisco, took up the 25-acre tract (then) comprised within the boundaries of Broadway, Webster, Clay and Pierce streets, and started a milk ranch.

After 12 months, he disposed of this business, proceeded to Bellingham Bay, Puget Sound, and became connected with the local coal mines there. In 1856 he was joined by his wife Margaret Ellen (McLay) and the couple’s three small children in California, and with them settled at San Francisco Pass, 30 miles from Los Angeles.

Margaret and the children had traveled down the Mississippi River, and on to Panama, crossing the Isthmus of Panama by mule, not sure Joel had received word when they were to arrive. Joel and Margaret (from the village of Hazel Green, Grant County, Wisconsin) married on August 28, 1841.

Margaret was born November 27, 1820 in Fintry, Stirlingshire, Scotland to Moses and Margaret (Ewing) McLay.It was in 1857 when Joel’s travels finally brought he and his family to Diablo Valley where he founded and laid out the town of Clayton. Joel and his brothers, Charles and James, became very successful community and business leaders in the San Francisco Bay Area and Joel also became one of the major landowners in Clayton. Envisioning a center for those who engaged in surrounding mining and agricultural activities, Joel bought 40 acres from E.J. Clark, in the Mitchell Canyon area, later increasing his holdings to 1,400 acres with the subsequent purchases and provisions of the Homestead Act. 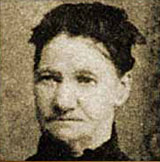 His first name for the new community was “Garibaldi” honoring the Italian patriot who had unified Italy. The toss of a coin is said to have decided whether it would be “Rhinesville” for his mercantile partner, Charles Rhine, or “Clayton”.In all, Joel and Margaret would have nine children.

Three children were born in Wisconsin, and three in Fort Tejon Territory, where Joel and Margaret ran a horse ranch and stage shop for travelers heading into the Central Valley and north towards San Francisco. Three children died of childhood diseases and were buried near Lake Elizabeth. The youngest three were born in Clayton, California. Two of the three children born in Clayton also passed away in childhood. The couple’s four surviving children were Elizabeth Jane, Benjamin Franklin, Charles Joel and Henry Alfred (Hallie).

Joel passed away on March 10, 1872 of pneumonia in Somerville, California. He was 60 years old, and was buried at Live Oak Cemetery, now located near Clayton, in Concord. Margaret passed away on April 28, 1908 at the age of 88, in San Francisco of heart problems and was buried alongside her husband. On October 10, 1998, family, friends and members of the Clayton Historical Society dedicated a granite marker placed on the final resting place of these two important and courageous pioneers.